The Burren and Cliffs of Moher Geopark: Evidence in the rocks

The subject of Global Climate Change is increasingly being referred to as ‘the most pressing issue of our time’ by independent researchers, government scientists, activists, political organisations and the media. Changing climate means different weather patterns which will directly affect; how and where crops grow, animal and bird migrations, changes in ocean current circulation, droughts, flooding, soil erosion and the availability of fresh drinking water.

For Ireland, We can expect the average temperature to rise in the future. The average temperature in the years 2021 to 2060 will be 1 to 1.5°C higher compared to the years 1961 to 2000. For the same years, Met Eireann, (the Irish Meteorological Service) through its Community Climate Change Consortium for Ireland (C4I) is predicting wetter winters and drier summers.

Climate change clearly alters ecology and it has recently been demonstrated in a study of soil mites that evolution can be affected by ecology far quicker than has previously been thought. “What this study shows for the first time is that evolution and ecology go hand-in-hand,” explained co-author Tim Benton, professor of population ecology at the University of Leeds, UK. When animals at the bottom of the food chain are affected there can be a rapid, though difficult to predict knock-on effect further up the food chain which will affect humans directly. The open access publication on soil mites, ‘Eco-evolutionary dynamics in response to selection on life-history’, is published in Ecology Letters (2013).

For geologists there has never been any doubt about global climate change. We can see the evidence of ancient coal deposits in Antarctica over 250 million years ago, tropical coral seas in Europe over 330 million years ago and large lakes in the Sahara 250,000 years ago, not to mention the large ice sheets which covered Ireland until 15,000 years ago. In many cases there is good evidence that major climate changes were responsible for mass extinction events.

The major issue today is the effect that Human activities are having on climate change. Climate change would happen today even if there were no humans on Earth; in order to evaluate the added effect of Humans we must first understand the underlying non-human changes.

Evidence for past climate change in the Burren.

The rocks in the Burren and Cliffs of Moher Geopark show abundant evidence for past climate change. The most obvious is the evidence for the last Ice age. 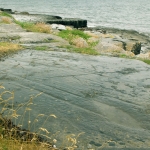 Glacial striations are the scratch marks formed from rocks trapped in thick sheets of ice being dragged over bedrock. The orientation of these scratch marks shows us the direction travelled by the ice. 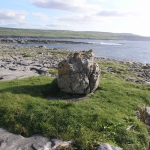 Glacial erratics (Fig. 2) are boulders that have been picked up and carried by ice and then dropped and left behind after the ice has melted.

The last glaciation affected the surface of the Burren but much further back in time, deep within the bedrock of the Burren we can see evidence of climate change from over 300 million years ago.

The Burren Terraces: Evidence for Climate Change 330 million years ago. 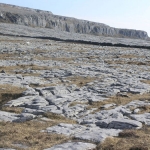 The Limestone terraces of the Burren exposed along the coast road near Poulsallagh and elsewhere are formed by preferential erosion of clay layers within the limestone. 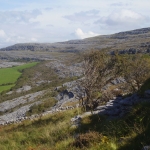 As we find similar cycles in limestone of the same age in the UK and the USA we know this was not a local event but a global one. The sea level was rising and falling in response to ice caps forming and melting during an ice age similar to the recent one that left the glacial erratics around the Burren. So, large scale polar ice caps form regularly on Earth and are a natural part of global climate change.

Subtle changes in the orbit of Earth around the Sun and slight changes in the tilt of the Earth’s axis are thought to be the main long term contributors to the variation in the amount of solar energy that enter the atmosphere from the sun. These variations are thought to be cyclic and are known as Milankovitch cycles after Milun Milankovitch who first identified the mathematical models that predict these cycles in 1920.

What can we do?

We cannot change the orbit of the Earth or the amount of energy being delivered by the Sun but we can take responsibility for the amount of carbon dioxide (CO2) and other industrial gases that we release into the atmosphere. Our carbon footprint is a measure of the amount of CO2 emissions each of us causes in our daily lives through our travel, energy use and lifestyle. By reducing the amount of fossil fuels being burned we can directly reduce our carbon footprint. As most of our energy comes from burning fossil fuels, reducing our energy usage will automatically reduce our carbon footprint. You can measure your carbon footprint at the Environmental Protection Agency. Burren Ecotourism is a network of businesses in the Burren that are dedicated to sustainable tourism and have implemented a range of energy saving and waste water management strategies to reduce the impact on the atmosphere.