Flora of the Burren

The Burren is a solitary, austere and strangely beautiful place that makes your senses come alive. It is a fertile, fragile, plant-rich and sensitive landscape. Of all the natural history interests that are intermingled and interdependent on this limestone plateau, it is perhaps the plants and flowers which have caught the public imagination the most.

The mystique of the Burren flora lies not so much in the frequency of rare species, but in the assemblage or co-habitation of certain plants and the Burren locations they choose. The unique circumstances prevailing in the Burren are most strikingly demonstrated by the simultaneous occurrence of the Mediteranian orchid Neotinea maculata (the Dense-flowered  Orchid) and the artic alpine species Dryas octopetala (Mountain Avens). Equally interesting species are the southern continental Helianthemum canum (Hoary Rock-rose), the alpine Gentiana verna (Spring gentian) and the northen continental Dasiphora (formerly Potentilla) fruticosa (Shrubby cinquefoil). 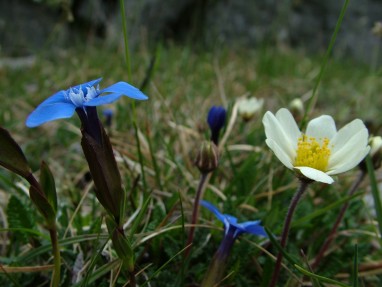 The Burren, with its high oceanic climate, is never out of bloom in this rock garden that runs riot with colour. The plants rotate with the seasons; ferns or moss in the late autumn and winter and the crescendo of the spring and summer flowering.

Many factors have influenced the development of this exotic combination of plants here in the Burren; the growth and retreat of the last ice sheets which transformed our land over 15,000 years ago, the limestone which makes up the bedrock of the Burren, the rotational grazing cycles of farmers and the plentiful supply of wind and rain. These and other factors combine to make this a place for the causal visitor or the experienced botanical academic. The flowers tell us that  the Burren is a place for all.

The fauna of the Burren…

….generally gets a lot less attention than the flora as most wild animals are shy and difficult to see. Feral goats, foxes and hares are the most common mammals encountered in the Burren uplands, with rabbits once common but now much less so. 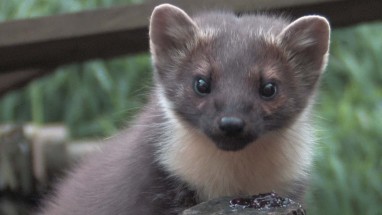 One of the most renowned members of the Burren’s faunal community is the pine marten (martes martes). Known as Cat crainn (tree cat) in Irish, they are adept tree climbers and excellent hunters of small mammals, birds and frogs but will also eat fruit and berries.

Seven of the nine bat species in Ireland have been found in the Burren. The Lesser Horseshoe Bat is internationally endangered but finds the caves of the Burren an ideal sanctuary.

Some other mammal species that may be found in the Geopark are the Field Mouse, Brown Rat, Bank Vole, Rabbit, Red Squirrel, Badger, Otter, Mink and Stoat. The Mink was introduced into the Irish countryside as escapees from fur farms.

Ninety five species of bird have been recorded within the Geopark, at least fifty of which have used the Park for breeding. In particular keep an eye out for the Peregrine falcon (Falco peregrinus), Yellowhammer (Emberiza citronella), Common sandpiper (Actitus hypoleucos) and Golden plover (Pluvialis apricaria).

Over seventy species of land snails have been recorded in the area, thanks to the abundance of shell-building calcium carbonate.

28 of Irelands 30 butterfly species are found here, with two more or less limited to this area – the pearl bordered fritillary and the brown hairstreak.