The Geology of the Burren

The Burren is not a barren and boring museum of stones, monuments and scientific curiosities. Quite the contrary, it is a living place teeming with nature’s bounty: ordinary and exotic rocks, plants, animals, insects and birds. Its geology and diverse habitats are packed with startling features and surprising landforms. Interwoven into its geology and geography is a rich history beginning 330 million years ago – before human habitation; before dinosaurs, before flowering plants – and unfolding in its many chapters right up until today. All that bounty is here to be discovered.

In some ways geology is probably the most dramatic story on earth – the story of breathtaking, relentless change. It is about the most spectacular events on the planet; about ice ages that changed the landscape of much of the earth; about volcanoes that remoulded whole countries; about earthquakes that continue right now to cause seismic and social upheavals all over the globe. Geology is also about waves and currents from long gone seas and rivers as well as all the plants and creatures that lived and died as these dramatic changes took place. Here in the Burren that story is condensed into 530 square kilometers of diverse and magical landscape which includes evidence of all the above and more.

But geology is nothing unless it’s connected to life – ecology, history, agriculture, livelihood, tourism, people. That’s the special essence of a Geopark. A wonderland, teeming with magical clues about, not only where we come from, but also what the present and future holds. Join us in learning the story; and in becoming part of it.

…the oldest rocks visible on the Burren’s surface were formed during the Carboniferous period (between 359 and 299 Ma). These limestone rocks formed in shallow, warm, tropical seas 10 degrees S of the equator.

Common fossils found in the Burren limestones are crinoids (relatives of starfish), corals (similar to the ones we see today), brachiopods (filter-feeding animal that can be found today), and gastropods (snails). As most of these fossils are broken, very few are found intact, it indicates that the floor of the shallow, tropical sea was agitated by waves and the fossils were moved around.

It took approximately 20 million years for the limestone to form. About 500m limestone is visible on the surface of the Burren; the base is another 300m!

Changes in sea levels exposed the limestone. These rocks were weathered and dissolved by rainwater to form ancient Karst landscapes. Mudstone was formed when the limestones were exposed for such long periods that they became covered in soil. Thick bands of mudstones (about 200mm thick) are visible today. The mudstones contain particles of volcanic ash from volcanoes actively erupting to the south.

Occasional thin bands (50-200mm) of dark grey to black Chert are also visible. Chert is mostly composed of silica which comes from the shells of microscopic plankton that lived where the limestones were formed. He silica rich shells of these plankton were scattered evenly throughout the limestone. When the limestones were buried and compacted the silica dissolved under the pressure. The silica fluid flowed through cracks and along the gaps between the layers of rock (bedding planes) solidifying and forming hard silica rich layers of chert. 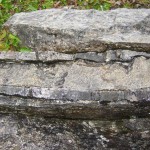 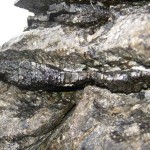 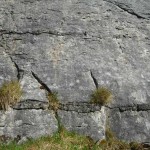 As millennia passed the sea floor subsided due to stretching of the Earth’s crust and the shallow tropical sea began to deepen. Around 326 Ma there was a major rise in sea level as the basin deepened very rapidly. As limestone can only be formed in shallow seas, this process ended quite abruptly and for several million years almost ne sediment was deposited except for bones and teeth of fish and other marine vertebrates whose hard tissues were rich in phosphate. These phosphate deposits formed thin black bands on top of the limestones. Up to 2m thick near Doolin, this phosphate-rich sediment was mined as an ingredient for fertiliser. 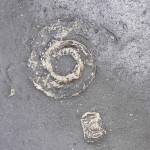 …visible at Doolin and on high ground at Poulacapple and Slieve Elva were formed as clay particles originating from far away rivers settled and became compacted on the sea bed. These were the only sediments deposited in the region for around 5 million years. There was no light, very low oxygen levels, abundant dissolved sulphides and no organic matter and as a result the deep sea floor supported very little animal and plant life. The only fossils found in the Shales are the remains of animals that lived closer to the surface such as goniatites.

Around 318 Ma extremely large volumes of silt and fine sand washed in by a river delta overwhelmed this quiet, deep sea basin. These sediments built up a slope in front of the river delta. As the sediments were deposited so quickly they became gravitationally unstable and slid and slumped down the slope before they were fully compacted into rock. This can be seen on the south side of Fisherstreet Bay at Doolin.

Hundreds of metres of sediment were laid down in less than two million years compared to the Clare Black Shales that took circa 8 million years to form 12 metres! As the sediment was deposited faster than the basin was deepening, the slope sediments were overlain by sandstones and siltstones that were deposited in the delta itself.

The Cliffs of Moher 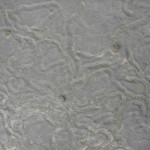 Repeating cycles of sandstone, siltstone and mudstone are spectacularly exposed at the Cliffs of Moher. These cycles reflect changes in sea level. Each time the sea level rose, the delta shelf was flooded by sea and marine mudstones were deposited on top of the deltaic sands and silts.

Inbetween flood events the sea floor was calm allowing current ripples to form on the sediment surface and organisms to make trails in the sediment. Trails known as Trace Fossils possibly made by extinct arthropods and gastropods can be seen in abundance in Liscannor stone, used at the Cliffs of Moher. 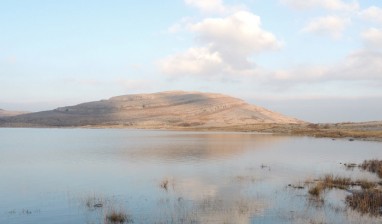 The rocks of the Burren are tilted between 2 and 5 degrees to the south and gentle folds can be seen at Slieve Roe and Mullaghmore. The forces that caused these tilts and folds also caused many joints, or cracks, in the limestone. Over time these microscopic cracks were widened by hot mineral-rich fluids forcing their way through. Evidence of this is seen today in the mineral bearing veins running roughly N-S through the entire limestone sequence. Some of these veins still contain minerals such as calcite, fluorite, galena and pyrite but most have been weathered away and widened to form fissures.

Approximately 1.8 Ma Ireland was covered by glaciers as an ice age began. The last stage of this ice age ended approximately 12,000 years ago. As the ice moved it carried along with it all the sediments, stones, rocks and boulders that were picked up along its route. Much of this material was then dropped as the temperature warmed up and the ice melted. Deposited glacial material includes Erratics, Glacial Till (a mix of rocks, stones, sand and clay up to 20m thick in some valleys), Drumlins (a rounded hill of glacial till shaped by movement of the ice over it) and Moraines (ridges of glacial till which formed along the edges or front of a glacier, as the ice melted). 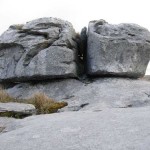 What makes the Burren landscape different from other glaciated landscapes is the dissolution of the underlying limestones by water. This landscape is termed ‘Karst’ after the Kras region in Slovenia where this type of dissolution-dominated landscape was first described. The Burren is most correctly termed a ‘glaciokarst’ region. This is an area where the development of karst features (karstification) has been influenced by the effects of glacification.

As the ice sheets moved across the Burren, they eroded the overlying soil, weathered rock, and weak bedrock, exposing fresh surfaces of limestone. These surfaces of bare limestone were then, and are to this day, exposed to dissolution by rainwater resulting in the classic glaciokarst landform – the Burren Limestone Pavement.

Full information on the Burren can be obtained through the popular book Stone, Water and Ice available throughout the Burren.