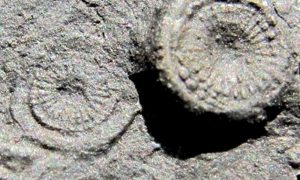 A new species of fossil crinoids dating back to 325 million years ago has been discovered in Doolin, County Clare. Called Heloambocolumnus harperi in honour of Professor David Harper of Durham University (formerly of NUI Galway), the fossil discovery was made by Dr. Eamon Doyle, geologist for The Burren and Cliffs of Moher Geopark and Clare County Council.

Crinoids, also called ‘sea lillies’ because they look like plants, are sea creatures with long narrow stalks and multiple arms that feed on plankton and are abundant off our Atlantic coast today. However, 325 million years ago the Atlantic Ocean had not even started to form and what we now call County Clare was part of an earlier sea, located near the Equator. While fossil crinoids are quite common today this new species is entirely unique and is only known from one location in the world, namely Doolin.

“This and other new finds from the area has formed the basis of a series of visits to National Schools in the Burren to promote awareness about the wonderful geological legacy we have on our doorstop and to encourage a new generation of palaeontologists, that is, geologists that specialise in the study of fossils,” explained Dr. Doyle.

He continued, “It is very fitting that the new fossil has been named after Prof. Harper as he was my PhD supervisor when I was at University. His encouragement and ability to share his knowledge is something that I can now copy and pass on to a younger generation. Children have a natural curiosity about our planet and the ability to ask difficult questions. It is increasingly important to study past life on our planet to understand what might happen as global climate changes into the future,” added. Dr. Doyle.

The fossil has been described and named in a collaborative publication with Prof Steve K. Donovan, a leading authority on fossil crinoids and senior researcher at the Naturalis Biodiversity Center, Leiden, The Netherlands. See www.sciencedirect.com/science/article/abs/pii/S))16787819300203.