Exhibition: The Geopark Captured on Canvas 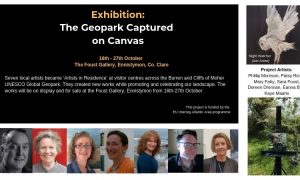 This summer seven local artists became ‘Artists in Residence’ at visitor centres across the Burren and Cliffs of Moher UNESCO Global Geopark. They created new works while promoting and celebrating our landscape. The works will be on display and for sale at the Foust Gallery, Ennistymon from 16th-27th October.

The artists included Doreen Drennan, Éanna Byrt, Kaye Maahs, Mary Fahy, Patsy Ricks, Philip Morrison, and Sara Foust. They visited Aillwee Cave, The Burren Nature Sanctuary, Caherconnell Fort, the Burren Centre, Doolin Cave and Moher Cottage to promote the concept of geotourism and forge links between artists and tourism businesses. During their ‘residence’ at the visitor centres they painted the landscape and chatted to visitors about how they saw it.

The An exhibition of the works they created will be held at the Foust gallery, Ennistymon 16th-27th October. The works will be on display and for sale.

Burren based artist Kaye Maahs has donated a painting she created during the programme in support of Aillwee Cave’s raptor and vulture conservation efforts. The painting titled ‘Night watcher (Jon Snow)’ is of a snowy owl, one of the performing artists at the Aillwee caves Burren Birds of prey centre and will be auctioned on 17th October at 7.30pm. 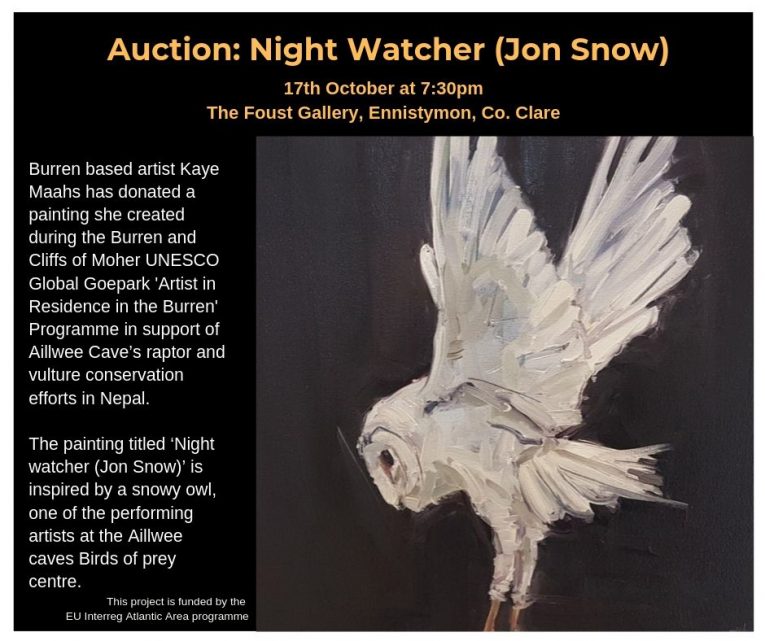 Doreen Drennan is an impressionist painter documenting the Burren region and the Wild Atlantic Way for over 30 years. Doreen’s preferred medium is oil paint. She utilises brush and knife techniques to execute the challenging form, colour, texture and depth of her surroundings.

Her subjects range from the wildness of the Atlantic to the rugged marks left on the landscape by the sea. She is noted for her ability to capture the changing atmospheric sky lines above the Atlantic and is continually inspired by the dramatic fleeting light of the West.

A current resident of the Courthouse Studios in Ennistymon, Éanna is a former student of the Limerick School of Art and Design and more recently of  the RHA graduate program. His current studio practice uses traditional painting methods to describe contemporary themes of the everyday. Through a blend of traditional methods augmented with digital techniques he portrays subject matter through the allegorical application of these techniques. He finds influence in the work of Vincent Desiderio, Jenny Saville, Eric Fischell, Diego Velasquez and William Orpen.

The Burren and Cliffs of Moher UNESCO Global Geopark, managed by Clare County Council, supported by Geological survey Ireland are partners in an EU-funded Interreg Atlantic Geoparks project that  promotes economic, cultural and sustainable geotourism in 12 destinations along Europe’s Atlantic frontier. The project is developing new initiatives including the creation of a transnational European Atlantic Geotourism Route along with products and experiences to support it in each destination. 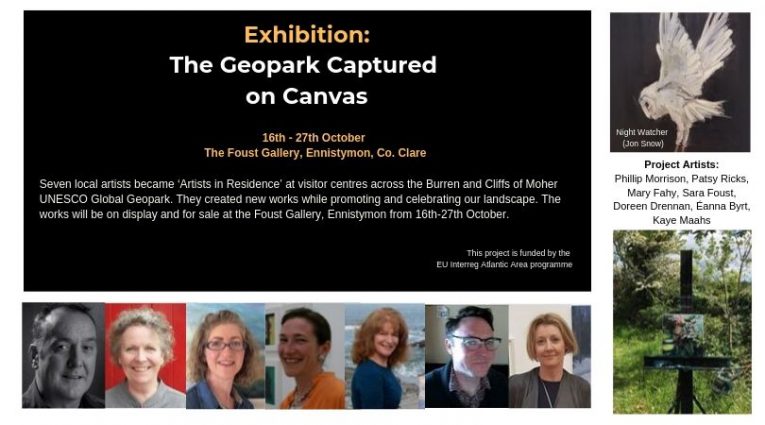