Artists promoting Geotourism in the Burren 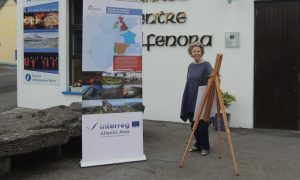 The Burren and Cliffs of Moher UNESCO Global Geopark is celebrating European Geoparks Week and their participation in The European Atlantic Geotourism Route by promoting the concept of geotourism to the region’s visitors.

The Burren and Cliffs of Moher Geopark has engaged local artists to visit popular tourism centres in the region as ‘Artists in Residence’ and to interact with the visitors while they paint the award-winning landscape.

‘Artists often see and appreciate the landscape in a very different way and by creating a conversation between them and the visitors to the region we hope to create an appreciation around the finer details of our surroundings and how we need to take care of it for future generations and visitors. By highlighting their work as artists and building new relationships with the tourism industry a more intimate and sustainable connection with the landscape can be forged’, commented Dr. Eamon Doyle, Burren and Cliffs of Moher Geopark Geologist.

The artists involved in the programme are the Ennistymon-based artists Sara Foust, Éanna Byrt, and Mary Fahy along with the Burren-based artists Doreen Drennan, Patsy Ricks and Kay Maahs.

The artists will be visiting Aillwee Cave, Doolin Cave, Caherconnell Fort, The Burren Nature Sanctuary, the Burren Centre and Moher Cottage over the two weeks from 27th May to the 7th June. An exhibition of their work will be presented in the Foust Gallery, Ennistymon later in the year.

The European Atlantic Geotourism Route is part of the EU-funded Interreg Atlantic Geoparks project which celebrates outstanding geological landscapes and has been created as a means of using UNESCO Global Geoparks to support the development of sustainable geotourism in a number of dramatically stunning landscapes in the European Atlantic Area. Clare County Council manages the Burren and Cliffs of Moher UNESCO Global Geopark and is a key partner in the Atlantic Geoparks project.

The Artists in residence programme will take place from 27th May – 7th June at several visitor centres including;

Local artists Sara Foust, Kay Maahs, Patsy Ricks, Éanna Byrt, Doreen Drennan and Mary Fahy will be visiting the centres during this time to draw and paint the landscape while interacting with the public.

Doreen will be at:

Doreen Drennan is an impressionist painter documenting the Burren region and the Wild Atlantic Way for over 30 years. Doreen’s preferred medium is oil paint. She utilises brush and knife techniques to execute the challenging form, colour, texture and depth of her surroundings.
Her subjects range from the wildness of the Atlantic to the rugged marks left on the landscape by the sea. She is noted for her ability to capture the changing atmospheric sky lines above the Atlantic and is continually inspired by the dramatic fleeting light of the West.

Patsy will be at:

Éanna will be at:

A current resident of the Courthouse Studios in Ennistymon, Éanna is a former student of the Limerick School of Art and Design and more recently of  the RHA graduate program. His current studio practice uses traditional painting methods to describe contemporary themes of the everyday. Through a blend of traditional methods augmented with digital techniques he portrays subject matter through the allegorical application of these techniques.