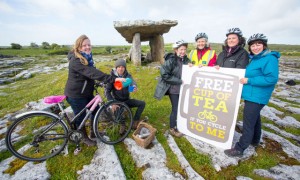 Several businesses in the Burren and Cliffs of Moher Geopark, all members of the Burren ecotourism network are offering free cups of tea to anyone who arrives to their business on a bike.

This is the first initiative of its kind in Ireland and is highlighting the fact that the best way to see the Burren is on a bike.

Developed by the Burren & Cliffs of Moher Geopark and An Taisce Green Schools Travel officer Roisin Garvey, in conjunction with the Burren Ecotourism Network, the ‘Free cup of tea if you cycle to me’ scheme will see cyclists offered a free cup of tea when cycling to participating businesses.

Irish Champion pro-surfer Fergal Smith, himself a keen cyclist, launched the initiative with members of the Burren Ecotourism Network at Poulnabrone Dolmen in the heart of the Burren on Tuesday, June 2nd.

“I have been working with The Geopark to promote sustainable travel and together we want to make the Burren the go-to place for cyclists” Róisín Garvey, An Taisce Green-Schools Travel Education Officer, “as a result of my work with several Green-Schools in the Burren region we have discovered a wide variety of beautiful safe cycling routes”

“Our aim is to raise the profile of the Burren and Geopark as a cycling destination. Burren Ecotourism Network members are already promoting cycling in the Geopark by offering various discounts for persons arriving by bike or on foot but this initiative represents more of coordinated effort,” Carol Gleeson, Project Manager, Burren and Cliffs of Moher Geopark.