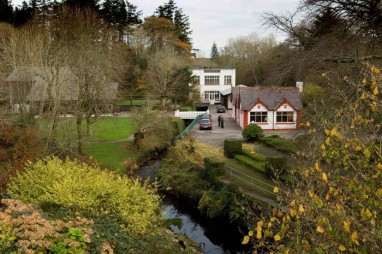 Lisdoonvarna is Irelands only Spa town. It lies on the southern edge of the Burren and became a popular health resort in the early nineteenth century thanks largely to its famous spa wells.

The Spa’s therapeutic mineral waters contain magnesia, iodine and iron. It is famous also for its September festival – one of Europe’s largest singles matchmaking festivals. It is an excellent base for exploring the Burren and sampling the famous music and craic of North Clare. It is also home to the Burren Smokehouse as well as numerous hotels and pubs.

Map available in 'Other Information'.

Lisdoonvarna and its Spa Waters Three small rivers flow through Lisdoonvarna, the Aille, Gowlaun and Kilmoon, all in deep ravines. Each has broken through the upper layer of shale and now flows on top of the underlying limestone. The shales are rich in phosphate, iron sulphide, calcium carbonate and organic matter. Where the shale meets the limestone, there is a layer particularly rich in phosphate and a number of mineral springs discharge from the shale at this point. The town of Lisdoonvarna developed around these natural spring wells, famous for their health-giving sulphur water and they became a major spa tourist attraction in the 19th century.

1. Rivers and Ravines
Lisdoonvarna is nestled within a landscape of rounded hills of shale rock. This shale was formed approximately 300 million years ago when clay sediments settled on the bed of a deep dark sea. Underneath this shale rock is the limestone, that is visible on the surface further north in the Burren. Unlike limestone, shale is not dissolved by water and the rivers flow on the surface. However, because the shale is made from clay particles it breaks and chips easily. Flowing to the left of the trail is the River Aille. The river has dug into the shale over the centuries and created a deep ravine.

2. Wetland Vegetation
Walking along the trail, you are surrounded by vegetation which prefers wet conditions. This reflects the impervious nature of the underlying shale which often causes water logging on the surface when drainage is impeded. Rushes, horsetails, willow herb, ragged robin and sedges grow among the grass of the parkland. The trees that line the ravine of the Aille River include birch, alder, willow, sycamore, scots pine and oak. On the opposite side of the ravine the rounded hills are covered by bog vegetation, including sphagnum mosses, black bog rush, sedges and furze.

3. The Twin Wells
Descending the steps, you are passing through the shale layer to where the Aille River has reached the underlying limestone. In a short space of time, you have climbed down through approximately 20 million years of geological history. At the bottom of the steps are the ‘Twin Wells’. Discovered in the mid-1700s, these wells are a source of chalybeate and magnesia and unusually the two separate wells spring from the same rock. Due to the popularity of the wells in the 1800s, steps were made down from the road above in 1870. An attendant working at the Twin Wells in 1908 earned 10 shillings (60 cent) a week.

4. Riparian woodland
Ascending the steps to rejoin the trail, a second river flows in the ravine to your left. This is the Kilmoon stream which is flowing to meet the Aille River near the Twin wells. All along the banks of the Kilmoon Steam, large trees line the banks. Beech, horse chestnut, sycamore, ash, alder and willow adorned with mosses and lichens are underlain with a shrub layer of holly, hazel, hawthorn, elder, blackthorn and ivy and a colourful ground layer of speedwell, herb robert, cross stitch, celandines and ferns.

5. Pump House
Continuing straight along the trail, passing to the rear of the Burren Salmon Smokehouse, you reach a pedestrian entrance gate to the park. On the opposite side of the road is the Town Library, housed in the former Pump Room of the ‘iron and magnesia wells’ of the Kilmoon stream. It was recommended that people first took a course of magnesia before taking the iron water. The magnesia water was said to be beneficial for those with ‘weak stomachs’, while the iron water was used as a blood tonic and particularly recommended to ‘young and weak females’.

6. The Pavilion
Returning back into the park through the pedestrian gate and along the path, turn left where the trail divides. The Pavilion was built in 1913 on land acquired for a park and recreation area. Mr Roughan of Ennistymon laid the foundation at a cost of £210 and Humphreys of Dublin constructed it at a cost of £1114, with steel from Harland and Wolff of Belfast. Lit by gas, with a maple floor and seating for 1,000 people it became a venue for theatre, dance and general entertainment. Eamon de Valera addressed a crowd of 3,000 people in the Pavilion on 30 July 1917 as part of his election campaign. Today, managed by the Lisdoonvarna Fáilte Development Group it remains a successful centre for varied activities set within a well developed activities park.

7. Gowlaun Spa Wells
Leaving the grounds of the Pavilion, cross to the opposite side of the road, continue over the bridge and turn left into the park. Close to the bridge the Gowlaun River joins the Aille. According to local information, sulphur springs were discovered on the Gowlaun River in the early 1700s when a man out hunting was assailed by the strong smell of ‘rotten eggs’. The smell came from hydrogen sulphide gas which is released from the sulphur rich spring waters. Analysed in 1713, the springs contain large quantities of sulphur and iron. In 1867 Capt. Stacpoole, the landlord, built two small houses over the Gowlaun wells and installed a pump. In 1875 the first bath house was constructed here. By 1878 over 5,000 visitors were recorded. The existing bath house was built between 1939 and 1945.

Open from April to October. Visit the pump room where you can sample the sulpher water for free – donations towards the restoration fund are always welcome.

The Spa Wells is a Geosite.

Lisdoonvarna (Lios Dúin Bhearna, meaning the Fort of the Gap) is set within a landscape of steep shale hills, interspersed with the deep gorges of the Aille, Gowlaun and Kilmoon rivers. Where the upper shale layer meets the underlying limestone a number of mineral springs rich in sulphur, iron, magnesium and calcium emerge, providing Lisdoonvarna with the health-giving water that has attracted visitors to the town for over 150 years.

Map available in 'Other Information'.

Get a tasting of our smoked salmon and watch a DVD presentation about the smoking process (free of charge).

We are passionate about our local and Irish foods that you can buy in our gourmet shop.

Free parking available, as well as access and facilities for the disabled.

The award-winning food menu is filled with delicious dishes such as traditional Irish bacon & cabbage and a traditional rendition of Irish stew as well as Colcannon with either sausages or Burren hot smoked salmon.

Food served every day Mid March to late October from 12pm to 4pm and 6pm to 9pm.

Kieran's Kitchen is a member of Burren Food Trail, map and details available in 'Other Information'

An A La Carte Dinner menu is offered in our Restaurant where the ambiance is friendly and informal. A menu is also offered in our Bar, where you can relax by an open turf fire.

All Dishes are freshly cooked to order and John sources as many ingredients as possible from local artisan producers and in our Potager Garden we grow a variety of vegetables and herbs.

Ballinsheen House 4 star guest accommodation is located in the pretty village of Lisdoonvarna on the edge of the Burren and only 10 minutes drive from Discovery Point 9 – The Cliffs of Moher on the Wild Atlantic Way.

We are ideally situated to explore The Burren National Park, The Cliffs of Moher and the Aran Islands.

Architect designed and set in its own beautiful landscaped gardens with several patio/deck areas to sit and enjoy the lovely scenery with ample parking. Ballinsheen House is situated in an elevated position, giving charming views across the countryside and yet only 5 minutes walk into the town centre.

Breakfast is served from 8.00am until 10.00am in the Dining room and Conservatory with stunning garden views, so you can linger and have a gloriously lazy start to the day.

All 11 rooms and suites at Sheedy’s have been individually designed and comfort is guaranteed….crisp white linen, fluffy white towels, luxury toiletries combine with timeless colour schemes to create an atmosphere of relaxation.

For Breakfast, all Jams, Marmalade and Breads are all made by John in our own kitchen.

An A La Carte Dinner menu is offered in our Restaurant where the ambiance is friendly and informal. A menu is also offered in our Bar, where you can relax by an open turf fire. Both Restaurant and Bar are open from 6.30pm with last orders for food at 8.45pm. The Special Value Early bird Menu is served from 6.30pm to 7.15pm.

All Dishes are freshly cooked to order and John sources as many ingredients as possible from local artisan producers and in our Potager Garden we grow a variety of vegetables and herbs.

Prices have been described by Georgina Campbell Guide as “Cooking at a price that is very fair for quality provided”.

Stylish accommodation with award winning restaurant. En-suite bedrooms. Wi-fi available in the Hotel.
Open all year (Thurs-Sun only during winter)

The Roadside Tavern which was established in 1865 as a pub, then was expanded into a bakery, now also harbours a micro-brewery under its roof.

Meet the Master Brewer, Peter Curtin, and delve a little deeper into the history of the brewery and the brewing process itself.

Burren Brewery is a member of Burren Food Trail, map and details available in 'Other Information'