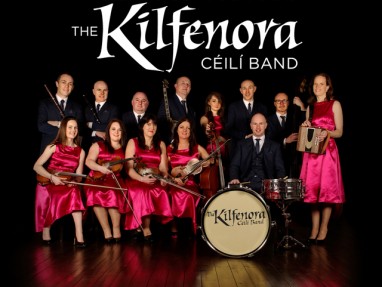 Kilfenora has it all…. the Pope as Bishop, a 10th Century Cathedral with 12th Century high crosses, the most famous céilí band in Ireland, the Burren Interpretative Centre, rare Ring Forts, Holywells, Castles, a 200 acre lake for trout fishing and boating, craft work, choice accommodation, good food, friendly people, dancing, fun and music sessions. All you have to do is visit Kilfenora and it will all be shared with you.

Kilfenora is a small village in County Clare in Ireland, just south of The Burren. It is situated at the southern tip of the Burren. It supposedly derives its name from its location, the church of the fertile hillside, although another explanation for the name is given in Cill Fionn abhrach, the church of the white brow or meadow. The official Irish name, as used on the roadsigns, is Cill Fhionnurach but no such person as a St. Fionnuir has ever been associated with Kilfenora. Other names for the town or diocese were Fenebore, Kilfenoragh, Finneborensis, and Collumabrach.

Kilfenora has been a focal point for the farming community in North Clare for thousands of years. The Celts are believed to have converged at Cathair Bhaile Cinn Mhargaidh (the town at the head of the market) for fairs. As Kilfenora grew around the monastic settlement it became a place where farmers could converge to sell their livestock and crops and enjoy the social contact of a visit to a market town. Fair days were commonplace in Kilfenora up to the 1960s but the establishment of marts in other towns in Clare and Galway soon took their toll on this way of life.

The Kilfenora Ceili Band is one of Ireland’s most famous ceili bands. A group of musicians had come together in 1907 with the intention of raising funds for the local church and to play at local houses or cross road dances. They went on to become a household name in Ireland and beyond. The members of the band changed over the years but their special brand of traditional dance music was extremely popular. The 1950s was the golden era of ceili dancing in Ireland. In the 1960s the band played regularly in England. Huge crowds turned out to hear them. They won three All-Ireland Fleadh Cheoil titles in a row. In July 1992 the local population gathered to pay tribute to the Kilfenora Ceili Band as they celebrated 85 years in existence. The event was broadcast live on RTE radio. The great tradition of bands in the parish stretches back to the 1800s with fife and drum, brass and reed and ceili bands all having their glory years.

Experience a special magic at Boghill with its stone circle, meditation hall, unspoilt land and diverse offerings of holidays & breaks. It is the perfect place to relax, unwind and renew your spirit.

Regular Guided walk with Tony Kirby: Meet at the Burren Centre, Kilfenora every Tuesday, Thursday, Saturday and Sunday in June, July and August at 2:30 pm.

Lickeen Trout Anglers Co-Operative manage the lake under licence from the Central Fisheries Board. For Boat Hire and fishing permits please contact the co-operative

The Burren Centre is in the picturesque village of Kilfenora.
Here you will be introduced to the visual delights and ancient mysteries which await to be discovered in this unspoiled corner of Ireland.

This walk through time will take you back through the aeons to a time when this area lay beneath a warm tropical sea. Follow the story of the formation of the Burren’s lunar landscape where man hunted bear, and wolves roamed the forests.See how, thousands of years ago, man left his mark on the landscape in the form of Dolmens and burial chambers. They still stand today, stone sentinels at the gates of our civilisation’s history.

Take the journey with us, watch history unfold in front of your eyes, listen to the sounds and feel the atmosphere of thousands of years ago.

Study the complex and unique environment which allows plants and flowers, not normally found together in the same country, to share the same rock crevices. The glorious Alpine Gentian, Bloody Cranesbill and Mountain Avens are just some of the floral gems which proliferate in the Burren.

The Centre and Tea Rooms are open daily from mid March to end of October.

Eating out in the Burren Centre Tea Rooms provides a real treat of all that is best in traditional home made-food!

Choose from a range of sandwiches, soups and stews to keep you nourished in our Irish climate! All food is home-made on the premises.

The Centre and Tea Rooms are open daily from mid March to end of October.
For the months of March, April, May, September and October 10a.m. to 5p.m.
For the months of June, July and August 9.30a.m. to 5.30p.m.
We will open at any time for groups of 12 by prior appointment.

At Boghill we offer a break with a difference – a refreshing change from a hotel or guest house. B&B and Hostel accommodation is available all year round. Sleeping for up to 40 people can be arranged in bedrooms and dormitories to suit your particular requirements with ample toilet and shower facilities to hand.

Come and stay at Kilfenora Hostel and be welcomed by warm, Irish hospitality with comfortable, affordable accommodation.

At Kilfenora Hostel we pride ourselves in our friendly service. Why not enjoy a quality accommodation experience in the peace and tranquillity of the Burren. We offer you an opportunity to stay in Kilfenora, one of the most historical and enduring Irish country villages in North Clare.

On their farm since 2007, Eva and Stephen Hegarty, have a small herd of free range, rare breed, Saddleback and Tamworth pigs. You can purchase Burren Free Range Pork meats at their stall at the farmer's markets in Ennis and Ennistymon or visit their farm by appointment.