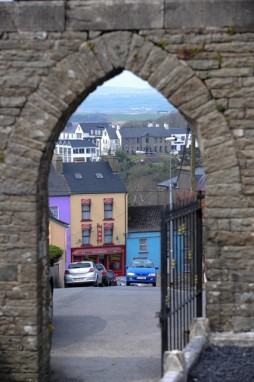 Inis Díomáin –river meadow. Ennistymon lies in the southern extremity of the Burren, and has a long history as a market town for the surrounding Burren community. It is a lively and bustling town, with the majority of the businesses still family-owned and run.

Many of the shops retain their traditional shop fronts and doors. The narrow street near the bridge over the Cullenagh River is the oldest part of the town. A little below the bridge, the river rushes over an extensive ridge of rocks resulting in the beautiful cascades.

The ‘An Gorta Mór’ Memorial was erected a mile outside Ennistymon on the road to Lahinch to commemorate the memory of the victims of the great potato crop failures/famine of 1845 to 1850 known as the Great Hunger (An Gorta Mór). It was dedicated on August 20 1995 – the 150th anniversary of that tragedy. Located across from Ennistymon Hospital, itself built on the grounds of the local workhouse, it was erected by a combined effort of the Ancient Order of Hibernians (AOH) Board of Erin and Board of America and the Clare County Council. 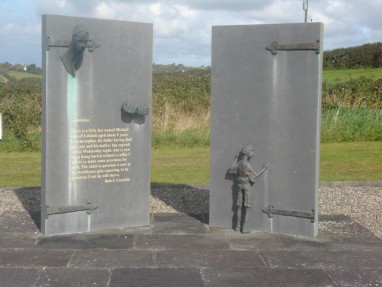 The monument was designed by an artist from Co Kerry and depicts an account found in the Minutes of the Meetings of the Boards of Guardians for Ennistymon Union held in the County Archives. The account centred on a note that was pinned to the torn shirt of a barefoot orphan boy who was left at the workhouse door on the freezing cold morning of February 25, 1848. The note read:

“Gentlemen, There is a little boy named Michael Rice of Lahinch aged about 4 years. He is an orphan, his father having died last year and his mother has expired on last Wednesday night, who is now about to be buried without a coffin!! Unless ye make some provision for such. The child in question is now at the Workhouse Gate expecting to be admitted, if not it will starve. — Rob S. Constable”

One side of the memorial depicts a child standing before the workhouse door, while across from that is the head of an anguished mother and two hands clenched in frustration or anger above the sorrowful text of the pleading note. If you are fortunate enough to visit the memorial, breathe a prayer for the unnamed souls that it commemorates.

Learn about the history of Ennistymon - map available in 'Other information'

Every Saturday 10am-2pm Easter to Christmas.

Ennistymon Farmers market is a member of Burren Food Trail, map and details available in 'Other Information'