As part of our GeoparkLIFE project we were looking to raise environmental awareness among students in the Geopark region. Working with Dr. Tiernan Henry of the Earth and Ocean Sciences Department, and Dr. Gesche Kindermann of the Centre for Environmental Science in NUI Galway we undertook a project with the transition year students of Mary Immaculate Secondary School Lisdoonvarna that looked at the integrated management of their local water.

The transition year students named their project Uisce Aille and explored and mapped the natural and built environment underlying the Aille River Catchment. In simple terms a catchment is the area of land contributing to a river, lake or other waterbody. Water is vital not just for our health but for the health of our ecosystems, the community and local economies. Because water is so integral to our wellbeing it is essential to know how it moves through the landscape, from the highest point and all along its route to the sea, be that through ground or on land.

Students in the field with hydrologist Dr. Tiernan Henry

Lisdoonvarna was an ideal setting for learning about the natural drainage of an area. The Aille River is fed by a number of tributaries including its headwaters on the slopes of Slieve Elva upstream of Lisdoonvarna. The system is characterised by predominantly surface water features on the shales until it reaches the karstic limestone cave system at Doolin, before entering the sea.

The students presented their project to local community groups early in 2017 where they detailed the catchment, the methods they used to characterise it and the benefits inherent in engaging in its management. The students also entered the project into the UNESCO Young Environmentalist Awards.

The GeoparkLIFE project developed an educational toolkit for this Integrated Catchment Management project to enable other second level schools in Ireland and in Europe run this important environmental education project with their students. Integrated catchment is increasingly being seen as essential to successful water management. 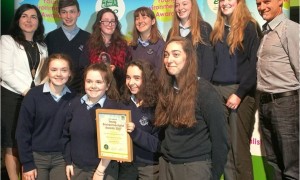 The project was named as joint winner of Senior Water Award at the  ECO UNESCO Young Environmentalist Awards. The awards honor Ireland’s greenest teens for their innovative environmental projects.

Over 80 groups were shortlisted from over 285 entries for the finals which took place in Mansion House, Co Dublin on 23rd May 2017.  Groups showcased their projects in front of an expert judging panel in the hope of winning awards across 10 environmental categories.

NUIG masters Student Grainne Barron who coordinated the project also showcased the students work and her coordination of the toolkit at the IAH (International Association of Hydrogeologists) conference in Tullamore and to the European Geoparks Network in March 2017.

The students were named as joint alongside Christ King Girls School.

The Burren & Cliffs of Moher Geopark has engaged with the Brothers of Charity, Ennis and local walking and heritage guide Tony Kirby to run a pilot project to open up the Burren landscape for people with physical and intellectual disabilities.

4 students from the Brothers of Charity, together with their support staff and heritage guide Tony Kirby, visited 7 locations throughout the Burren to test the level of accessibility and to create a template for heritage education for adults with both intellectual and physical disabilities.

Carol Gleeson (Burren & Cliffs of Moher Geopark), Tony Kirby and Moureen Kelly (Brothers of Charity) created a teaching pack for this pilot that led to the students having an experience that to date has not been available for people with disabilities. This is the first stage of a universal access programme that the Brothers of Charity, The Geopark and Tony Kirby will develop to create an accessible programme across the Geopark region.

Learning Outcome
The pilot has clearly demonstrated that heritage education can be tailored and delivered successfully in bespoke programmes yet still fulfilling the universal learning and experiences available to us all. Working with small groups of students in a targeted and tailored manner ensures the outcomes are always learner focused. The pilot project has also identified a number of locations that can be easily accessed by people with disabilities.

Next steps
The pilot teaching pack will be developed into a suitable training aid for guides and teachers who want to work with people with physical and intellectual disabilities in the landscape.

Tailor-made itineraries and programmes are to be created for small groups who wish to engage with the identified locations as learning spaces.

Reviews on TripAdvisor by the group:

What was said about Ailwee Caves

What was said about the Cliffs of Moher

What was said about Fanore Beach

The first student from Mary Immaculate Secondary School Lisdoonvarna to take part in the Young Scientist competition was Mary Keane Droney in 1975 with a project titled “An investigation of the harmful effects of smoking on health”. This project was under the guidance of her science teacher Sr. Rosaria McGuane. The next project was entered in 1990 and was under the guidance of John Sims. When John Sims first entered students in the competition it was known as the Aer Lingus Young Scientist of the Year competition.

This year saw the 24th year in a row that Mary Immaculate Secondary School has taken part in the Young Scientists competition. 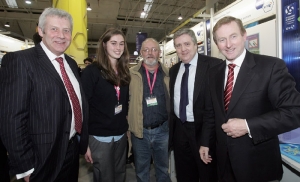 John Sims (centre) of Mary Immaculate Secondary school at the 2011 BT Young Scientist of the Year Awards with some well-known dignitaries, including Taoiseach Enda Kenny.

John has worked tirelessly over the years encouraging students and teaching the best principles of scientific investigation and reporting. John has written a short article about his involvement with the Young Scientist competition over the years which we are delighted to publish below:

I remember our first years involved in the competition. All the reports then were typed on a typewriter. As neither I nor the students could type, my wife volunteered to type the reports. All calculations were done using pen and paper and a calculator. If we had a project using a questionnaire each question was sorted by separating the questionnaires into bundles depending on the answer given.

We have come a long way since then. For me the greatest change came when we were able to use computers to do the projects. This change meant not only that reams of data could be stored easily in one place but that the analysis of this data was made a lot easier using programs such as Excel. Even here we have moved on from Excel to SPSS.

Computers also meant that questionnaires could be produced much easier. Another leap forward came with the advent of the Internet. This put at the students fingertips an easy way to research a topic, which is especially important for a small rural school that does not have a third level institution at its doorstep.

Of course all of these advances meant that the standard of our projects rose. Of course not only did our standards rise but so also did those of the other projects. This technology also attracted more projects and a system had to be introduced whereby projects had to be screened before they were chosen to go to Dublin. Last year over 1900 projects were entered for 550 places. So far most of our projects have passed this screening process.

Apart from the Young Scientists competition held in Dublin each January the school has become involved in science competitions further a field. In 2002 we first competed in the Northern Ireland young scientist competition. This is held in Belfast each June. The difference between the Northern Ireland Young Scientist and the BT Young Scientist is that all the sciences are judged together in their age group. The individual projects are also judged together with the group ones. There are three age groups and only two prizes are awarded in each age group, a winner and runner-up.

To date we have had winning projects at this event every time we competed. In June 2008 one of our projects was nominated to attend the Big Bang. This is the name given to the UK Young Scientist competition.

The Big Bang competition was held in London from the 4th. to the 6th. March 2009. Darren O’Gorman from Kilfenora competed with a project entitled “An Investigation of the Effects of Temporary Limestone Lakes (Turloughs) on leaf morphology of Ranunculus repens”.

The Big Bang is the main science and engineering event in the UK. It features the newly established National Science Competition – the first ever UK Young Scientist of the Year and UK Young Technologist of the Year.

The Big Bang Fair saw over 600 students aged 13-19 displaying their work on 200 project stands. As well as taking part in the competition the competitors also had the opportunity to take part in inspiring workshops and talks.

In 2009 competition the school was most successful to date in the Northern Ireland Young Scientist competition. Lisdoonvarna took three of the six possible category awards as well as three special awards. David Sims with his project entitled “Does Ascophyllum nodosum respond to herbivore attack?” was awarded runner-up in the Class A (11 to 14 age group). As well as this award he was also granted the Queens University Belfast award for Biological Sciences.

In the second age group, Class B (15 to 16), David Crowe was announced as the winner of the category with his project on the future of farming in North Clare. A clean sweep was had in this category when Sonya O’Loughlin and Katie O’Brien were awarded the runner-up prize in this age group. Their project was entitled “A predictive model of the spread of Fallopia japonica”.

Two travel awards were also taken by the school. Amie Barrett and Megan Casey with their project on “the effect of temperature change on the turning ability of starfish” were nominated by Crest to attend the Big Bang in Manchester in 2010. Also nominated to attend the Big Bang were Megan Byrne and Sinead McNamara, with their project on “movement of Littorina littorea on two contrasting shores”. Unfortunately this was the last year that students from the Republic of Ireland could take part in the Big Bang.

2009 also saw us entering SciFest for the first time. SciFest is a one day science exhibition and is open to all second level students. It is held in 15 Institutes of Technology around Ireland. SciFest is jointly sponsored by Intel and Discover Science and Engineering and is supported by a number of other partners. Fourteen young scientists from Mary Immaculate Secondary School took part in SciFest which was held in Limerick Institute of Technology on 28 April 2009. Lisdoonvarna was successful at the event taking home two category awards.

There are many highlights that stand out over the years. One of these was in 2002 when every project won a category prize. Other notable milestones in this long history of taking part in science competitions is that one student, Mark Sims, competed in six Dublin Young Scientists and four Northern Ireland Young Scientists and got an award in each of them and Darren O’Gorman representing the school in the UK Young Scientist for the first time.

Even though we have had great success at these competitions every year, each one is still as exciting as the ones that have gone before.

And the cycle continues. At present we are preparing to enter yet another substantial number of projects into the January 2014 BT Young Scientist and Technology Exhibition. This will be the 50th Young Scientist competition and it will be the 25 year John Sims has mentored projects in the competition. The interest in the competition from pupils from this school has never waned. Long may students from Mary Immaculate Secondary School in Lisdoonvarna blaze a trail at this fantastic competition?