The Flaggy Shore is located at Finvarra near New Quay. It is about half a mile of coastline that stretches from New Quay to Finavarra Point. Martello Tower still stands at Finavarra Point. A paved road runs along the shore making it ideal for walkers of all ability and age. 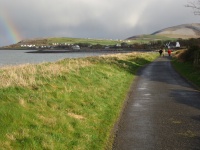 The Flaggy Shore is one of the most northerly parts of County Clare. Only Aughinish Island, across the narrow inlet, is further north. The low sea cliffs on Aughinish Island have formed as a result of coastal erosion. These cliffs are composed of thick layers of sediment that was deposited during the last ice age, over 12000 years ago.

The Flaggy Shore is an ideal place to find clues about where the ancient ice sheets came – and in what direction the glaciers moved. The clues can be be found by looking at the rocks along the shore and identifying the odd one out. Most of the cobbles and boulders along the shore are grey limestone rocks, but some are glacial erratics of other rock types, such as granite or sandstone. 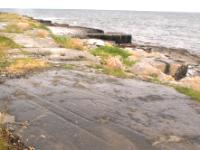 A short distance to the west of Flaggy Shore beach, we can see scratches and scrapes on the bedrock. These scratches, called striations, are all orientated WNW-ESE. When the glaciers moved over the land, they bulldozed the land’s surface. Some rocks at the base of the ice were pushed along under the moving ice sheet, whereby they scraped and scored the underlying bedrock.

The loose limestone rocks and coastal bedrock also contain various types of fossils of creatures that lived in the sea over 330 million years ago – during the Carboniferous period. The branching colonial corals (fasciculate lithostrotionids) are some of the best examples of fossils visible in these rocks.

The low cliffs opposite the Flaggy Shore are on the most western headland of Aughnish Island. The cliffs are made of sands, gravels and boulders that were deposited by ice sheets during the last ice age. The ‘soft’ cliffs are slowly being eroded by the sea. 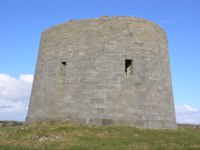 During the last ice age, over 12,000 years ago, great ice sheets moved over the Burren and over much of Ireland. The ice sheets acted like huge bulldozers, eroding the surface of the land and transporting huge amounts of sand, gravel, and boulders over very large distances. When the ice sheets melted, all of the sediments and rocks in the ice sheets were dumped on the land surface. These rocks are called glacial erratics. Large limestone erratic boulders can be seen throughout the Burren. We can also find a variety of rocks in the Burren that do not come from this limestone landscape.